Who Won the Hamper?

London Book Fair 2017: How many books are in our looming book mountain?

During our time at the London Book Fair 2017 we ran a competition for those brave enough to take a guess as to how many books there were in our Book Mountain. We saw some interesting approaches to working out how many books there were making the structure.
Most people decided to take an educated guess but some approached the task in a very scientific manner, trying to work out the number of layers by the number of books at the base and the top. But the Book Mountain proved to be incalculable and in the end a pure guess was successful.

And the winner is…

The winner of the competition, Emmanuel Laureau at Talent Sport in Paris was only one book out with his guess. The five runners up were: Yasmine Khan of Alchemy Arts (745), Alison Gadsby of David Fickling Books (742), Kai Pedersen of AKTbladet in Denmark (750), Russell Clark of Cambridge University Press (752) and Mitul Mistry of Beacon Books in Manchester (753). All five of these lucky runners up received a wonderful Biddenden Vineyard gift pack with a bottle of wine and three preserves. Emmanuel won himself the grand prize that was the luxurious hamper from Biddenden Vineyard.

There were hundreds of people that took part in the competition and the Book Mountain itself saw lots of interest from visitors and other exhibitors. So much so that we have a strong feeling there could be several copies turning up at next year’s London Book Fair, and even at Frankfurt later this year. We may have to think of something even bigger and better for next year’s show.

Come and visit our stand again at next year’s London Book Fair!

We would like to thank everyone for taking part in our competition and for visiting us at our stand, it was great to meet you all and we hope to see you all again at next year’s London Book Fair. 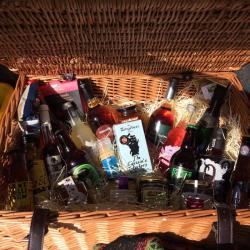